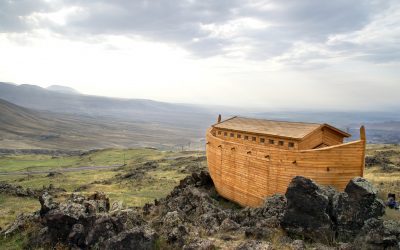 Annie and LJ are a fictional couple introduced through the Healthy Healing Eats blog in January 2020.  Their storyline promotes healthy eating and earth-friendly practices.

The Ark floated silently through the dark night. Although the skies were clear, the earth was saturated from 500 days of rain. On day 200 of the unremitting downpour, all the lakes, rivers, and oceans, crested, and their waters now covered every square inch of the planet. In 2020 global warming finally reached a tipping point, and the South Pole glaciers began to melt in rapid succession.  The rising sea levels increased coastal erosion, elevating storm surges that, in turn, warmed air and ocean temperatures, thus creating increasingly intense storms.  Now home was underwater.  The only survivors of the apocalypse were a small group of environmentalists who worked for decades, anticipating the inevitable. They built massive Arks, each for a specific function. Annie and LJ, who were a part of the group, were assigned the Ark of seed agriculture. They spent the past several years preparing by working with the network of 1700 gene banks around the world that held seeds unique to each country’s agricultural heritage.   But not relying solely on those banks; they petitioned the central repository of the seed bank network; The Global Seed Vault, also known as the Doomsday Vault, to store seeds there too.  The vault located in Norway was the result of the International Seed Treaty that the United Nations negotiated to preserve the earth’s biodiversity. The agreement was signed in 2001, and the vault opened in 2008.  Now its entire contents, all 930,000 varieties of seeds representing more than 13,000 years of agricultural history were in the hands of Annie and LJ, and they took the responsibility seriously.

As was her daily evening habit, Annie checked the top-level gardens to make sure the rain barrel connections were tightly connected to its drip system.  She finished and went to the navigation room, where she found LJ. “What are you doing, sweetheart?”

“I’m using celestial navigation to determine our location. I want to make sure we are on track to rendezvous with the other Arks tomorrow as planned.  How are the gardens doing?”

“They look good.  We should have plenty of fruits and vegetables to share. Did you know all the food comes from heirloom seeds, meaning their biological purity is intact?  Heirloom fruits and veggies come from open-pollinated seeds that produce plants whose characteristics are identical from generation to generation.”

“Yes, it is the offspring of your grandparent’s tomato plant and will have the same look, flavor, vitamins, and minerals.

It’s a relief to know that when we can plant on earth again many of the seeds from the doomsday vault that are of the ancient and wild varieties and have not been in circulation for hundreds of years contain the DNA codes to start over again.  Remember, when we were gathering the seeds, and seeing the loss of biodiversity due to wars and climate change? In fact, even though crop harvests had increased, genetic biodiversity had decreased so that before the rain started, only 30 crops provided 95% of food consumed by humans. And, the United States had lost over 90% of its fruit and vegetable varieties since the 1900s.”

“Thank god for the doomsday vault, right?  I am so glad it existed and that we could move its contents here to the Ark. I will be finished with the navigation coordinates in an hour.  According to my calculations, we should meet everyone about noon tomorrow.”

“That’s good to know because the latest set of seeds I took out of the Ark vault to grow to increase their numbers are now dry and ready for distribution.  I will make packages to go along with the food.  These seeds will keep us all alive until better times – they are everything; what we eat, wear, and what the planet’s future will be all comes from seeds.”