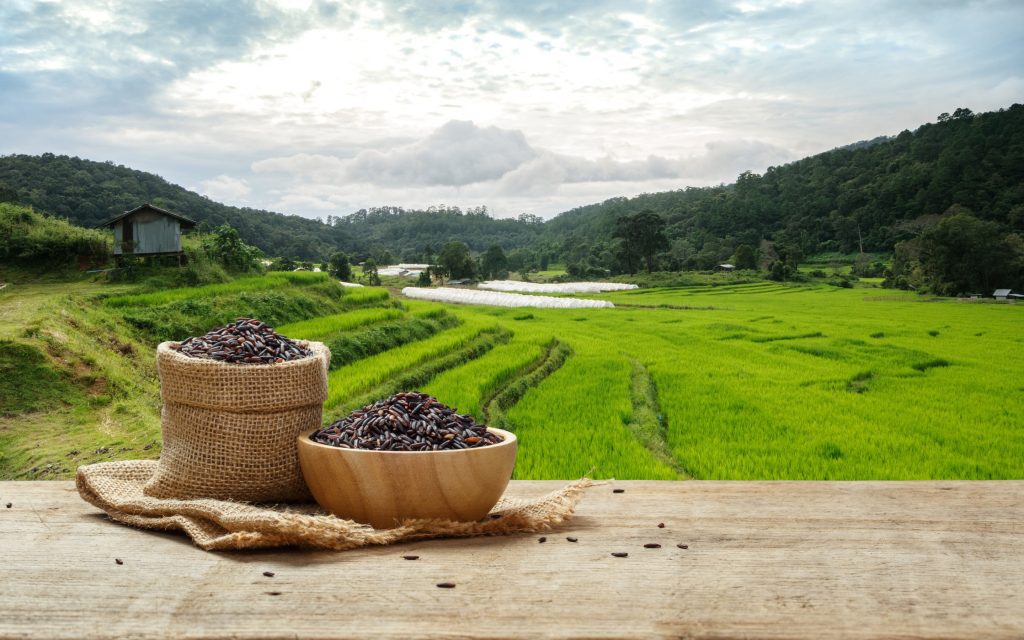 There is so much rice, yet so little time to eat all of the more than 90,000 varieties of cultivated and wild. Although only about 100 types are sold around the world, describing each variety in one article is not possible, so periodically Healthy Healing Eats will introduce some of the more popular of this grain, including its history, cultural traditions, and nutritional value.

The first rice is believed to have been grown and cultivated over 5000 years ago in Asia.  Rice was brought by world travelers to Europe and introduced to the Americas in 1694 by a ship that had been blown off course. Upon landing in Charleston South Carolina, the vessel was repaired to continue its trip to Madagascar.  In gratitude, for the help, the ship’s captain presented the colonists with rice seed.  During the American Revolution, the British occupied Charleston and confiscated the entire harvest of rice, including the seed needed for the following year’s crop.  For several years America could not grow rice until Diplomate Thomas Jefferson smuggled rice seed out of Italy, kick-starting the rice industry once again.

There are two primary groups of rice, short/long grain and all-purpose and specialty.

This rice comes in short and long grain varieties.  Both are popular due to their delicate flavor; however, lose much of their nutritional value during the refining process of removing the husk and bran layer where the nutrients and fiber are contained.  There are 267 calories, 44 grams of fat, 44.5 grams of carbohydrates, 0.6 grams of fiber, and 4.25 grams of protein in one cup of short grain white rice.

The short grain is very starchy.  Long grain rice is less starchy but is low in fiber and inflammatory due to its fat content made up primarily of omega-6 fatty acids.  Simple starchy white rice, due to its high carbohydrate content and glycemic index breaks down quickly causing a rapid increase in blood sugar levels.  When this happens, the pancreas sends out insulin to remove the extra sugar.  Any sugars that can’t be removed is stored as fat.  Some white rice is enriched to add back the minerals such as iron, magnesium, and niacin that were lost during the refining process, but this does not replace the loss of the fiber.

This rice also comes in short and long varieties.  Brown rice is whole grain rice meaning its husk and bran has not been removed giving it four times the fiber of white rice.  Since fiber slows down the conversion of carbohydrates into glucose, this rice is more effective at stabilizing blood sugar levels, and healthy elimination.  There are 216 calories, 1.8 grams of fat, 44.8 grams of carbohydrates, 3.5 grams of fiber, and 5 grams of protein in one cup of medium grain cooked brown rice.   Brown rice is super high in magnesium, phosphorus, and calcium.

Eating black rice instead of white has enormous health benefits.  There are 200 varieties of black rice which comes in short, and long grain as well as glutinous.  Known as the “Forbidden” rice, the black which was recognized for its healing ability was reserved solely for Chinese royalty in ancient times.  Black rice is not refined, so it retains the outer layer of husk and bran where its vitamins, minerals, fiber, and antioxidants reside.   Its deep color is due to its high level of anthocyanin; a phytochemical known to reduce LDL cholesterol (bad) and hardening of the arteries.  Studies show that black rice can also help prevent insulin resistance because its high level of fiber leads to a feeling of fullness, thus preventing overeating.  Today this rice is eaten by 1/3 of the world’s population.  Black rice is gluten-free and contains the highest amounts of protein and antioxidants of all rice, and nearly double the amount of fiber as brown.  A cup of cooked has 160 calories, 2 grams of fat, 34 grams of carbs, 4.9 grams of fiber, 5 grams of protein, and 3.5 grams of iron.

Rice, due to how it is grown contains arsenic.  Unrefined rice, while healthier contains higher levels of arsenic because the husk is retained.  All rice should be rinsed in filtered water and thoroughly soaked for 8-12 hours before cooking.  Follow up by rinsing thoroughly until the water runs clear.   Cook the rice in 1 cup of rice to 5 cups of filtered water and pour off the excess water after the rice is done. Return the rice to the pot, place a towel between the lid and pot, and leave on very low heat for about 10-15 minutes to absorb the extra moisture.   Cooking rice in excess water can reduce arsenic levels by 50-60 percent.