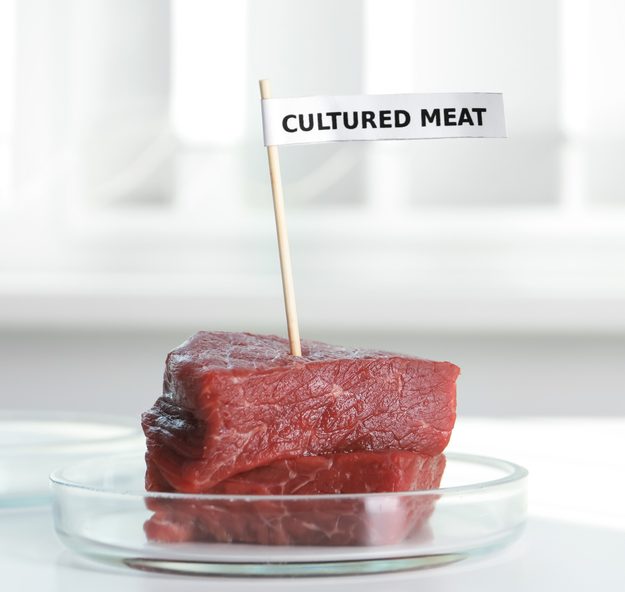 This is Cassie Bell coming to you from a deluged KOTWN radio station in the heart of the Bay. For those of you who tuned in this morning, thank you. Here at our station, we recognize between the horrendous fires we’ve all experienced recently and now the downpour that shows no end in sight; we realize global warming is real, and we are experiencing its results. Even so, the show must go on, and today I am pleased to share the microphone again with Annie, our resident food-as-medicine expert. Our topic today is Cultured Meat and what you should know about it. Welcome, Annie. In the past, you shared information on plant-based eating, the lifestyle, and its benefits. Today it sounds like you are taking us back to eating meat. Why on earth would we want to go back to that when as you’ve said in the past, the impact of raising animals for human consumption is what has contributed significantly to global warming?”

“Thanks for having me again, Cassie. It is true, that the practice of raising animals as a human protein source is no longer sustainable due to the adverse environmental impacts on our home planet. Researchers, scientists, and agriculturists have been working on several solutions.

One is plant-based protein. The market for this alternative, which mimics meat’s taste and texture, is currently worth 1.4 billion.

In the USA, 65% of respondents had consumed plant-based alternatives (defined as products that attempt to mimic the flavor and texture of animal protein but are made with only plant products) in the previous year. In comparison, 20% consumed them at least weekly and 22% daily. – Consumer Acceptance of Plant-Based Meat

Another answer is the growing movement toward vegetarianism. In 2022 it was noted that 22% of the global population is vegetarian, and in the US, 1 in 10 Americans over 18 say they do not eat meat, according to the Alliance for Science.

A third option, and the one I’d like to discuss today, is Cultured Meat, also known as Cultivated Meat. It is created by taking animal (including fish) stem cells (which self-renew and differentiate) and growing them in a laboratory. Because cultured meat is real meat, it appears to be an alternative for the population who prefers meat.

“This is fascinating, Annie. What are some of the advantages of cultivated meat?”

Annie leaned into the microphone, “Cellular agriculture, which it is also known by is the wave of the future for how to address worldwide hunger. Recently President Biden signed an Executive Order to Advance Biotechnology and Biomanufacturing Innovation. The order states, “We’re also looking to improve food security and drive agricultural innovation [through] foods made with cultured animal cells.”

One of the central values of cultured meat is that it does not require the slaughtering of animals.

According to ourworldindate.org, Livestock takes up nearly 80% of global agricultural land yet produces less than 20% of the world’s supply of calories. – Ourworldindate.org

Animal protein contains all the essential amino acids, while plant-based protein has some amino acids but not all. Cultivated meat does not require antibiotics, which means the elimination of foodborne illnesses, and there is little opportunity for bacterial contamination, such as E. Coli found in animal feces. So, if the only problem someone has with eating meat has to do with its environmental impact, cultivated meat might be the answer for them.”

Cassie nodded thoughtfully, “What are some of the challenges to producing cultivated meat.”

“Yes, there are several. Regulation guidelines are now in place but will require updating as the industry and technology advance, specifically around cell lines. It is not necessary to kill an animal to extract cells from them. It is a simple and painless process; however, the cell lines must be obtained from healthy animals with chain-of-custody documentation. Scaling up the acquisition of cell lines for mass production requires a public-private partnership due to the massive expense and to ensure all income levels have access to cultivated meat. And perhaps the most important of all, convincing the public to try and adopt cultivated meat as a healthy protein source.”

“Yes, it’s probably going to be a while before cultivated meat goes mainstream, but it seems all the elements for its success are converging?”

“Cassie, you are right. While science is still not clear on the nutritional value of cultivated meat, the industry is growing. At last count, there are 99 companies worldwide developing cultured meat and about 40 life science labs developing the cell lines needed for cultivated meat and seafood production. And that is just the beginning; the techniques to create cultivated meat can also be used to make lab-grown milk, egg whites, and animal leather.”

“This is probably one of the most fascinating talks we have had with you, Annie. How would you sum this field up?’
“Change never stops, and change is good. When you see countries, companies, and billionaires coming together to advance an industry, that means it is one we should all have on our radar and stay abreast of its developments. It is projected that by 2040 60% of meat will be laboratory grown.”